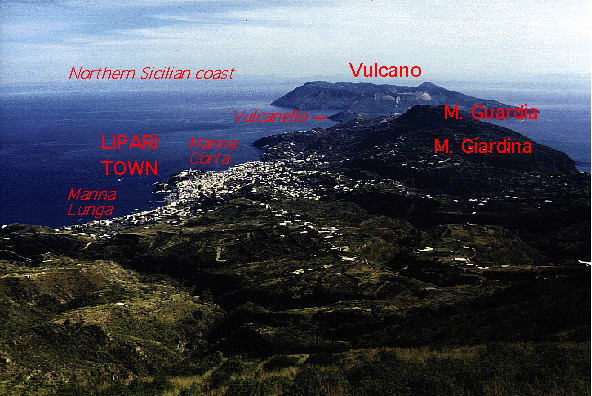 Photo above: Panoramic view of the southern part of Lipari, from the summit of Monte S. Angelo, on 15 September 1995. Notable features are annotated (visible in the large ca. 150 k JPG version of the photo).

Lipari, together with Salina and Vulcano, forms a major volcanic "pile" that coincides with a tectonic lineament which continues into N Sicily. This lineament is characterized by a tensional regime with some transcurrent motion.

Regarding volcanic history and chemical diversity, Lipari is the most complex of the Aeolian Islands. Pichler (1980) distinguished four main phases of volcanism on Lipari, but Crisci et al. (1991) defined two stages on the basis of geochemical and volcanological data. The first of these stages (223-42 ka) consists of 6 cycles, the second (42 ka-Recent) of 4 cycles. A cycle is here seen as a period of volcanic activity from a certain volcanic center (or a cluster of genetically related centers) separated from the previous and following cycles by long (i.e. thousands of years) repose periods. Commonly, a cycle begins with violently explosive activity and ends with almost non-explosive extrusion of viscous lava to form domes and/or thick "coulée-like" flows.

During the first two cycles, the initial explosive activity was of Strombolian character while in all following cycles, the explosivity was mainly driven by magma-water interactions. In all cases, the juvenile volatiles in the magma seems to have been exhausted after relatively short time, consequently the initial explosive phases of the eruptive cycles were only short and were followed by long subsequent effusive phases. Explosive activity during the effusive stages was only very minor. 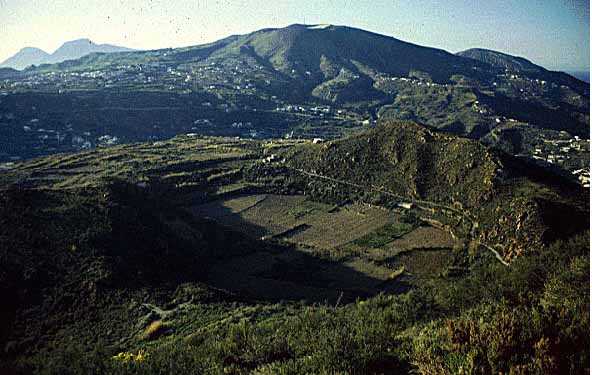 Beautifully preserved explosion crater on Monte Giardina, in the S part of Lipari. This volcano was active during the second most recent eruptive cycle on Lipari, when vents around Monte Guardia ejected major volumes of pumice and produced pyroclastic flows and rhyolitic domes. Ths cycle probably ocurred between 23 and 16 ka ago (Crisci et al. 1981). Monte Giardina initially produced a lava dome that was later truncated by an explosion which formed the 100 m diameter crater visible here.

Crater floor of Monte Pilato, the youngest volcano on Lipari, last active in the seventh or eigth century A.D. View is from the southern crater rim, at 472 m elevation, to the north. The perimeter of the obsidian dome and flow (Rocche Rosse; "Red Rocks") is outlined. Width of the crater is about 1 km. Photo taken on 11 September 1995.

A particular view of the vast crater of Monte Pilato can be obtained from the summit of Monte Chirica, the highest summit of Lipari (602 m). View is towards E. The village of Acquacalda is visible on the left (northern) base of the crater rim. Panarea is in the left background. Photo was taken on 14 September 1995.

The most famous products of the eruptions at Monte Pilato are its beautiful obsidians. They have aroused geologic interest for a long time also for their linear zones of devitrification (spherulite zones). This image was taken on the NW rim of Monte Pilato's crater.

Most famous place on Lipari, Quattrocchi offers a beautiful view along Lipari's SW coast towards Vulcano. "Quattrocchi" means "four eyes", assuming that only four eyes are anough to capture the amount of beauty that this view presents to the beholder. Indeed, many say that not even four eyes are enough. Photo taken on 1 October 1995.

Telezoom image of the town of Lipari, taken on 1 October 1995 from Monte S. Angelo, 3 km to the SE. The fortress hill (Acropoli) with its excvations, museum buildings, youth hostel, and cathedral, is visible in the center. Marina Corta is immediately to the right of it.

Lipari has experienced no volcanic eruptions during the past 1200 years. However, eruptions are likely in the future. This photo give an impression of what if would look like if Monte Guardia, looming above the town of Lipari, would enter in a new episode of dome growth. In fact, on this day, during mid September 1995, the only event on Monte Guardia was a brushfire. It came uncomfortably close within a small settlement on its NE slope but caused no major damage. Many forest fires on the Aeolian Islands are set by hunters who hope to obtain an undisturbed view of their prey by burning away the vegetation.